Life Is A Journey
49

Four Types of Creativity – Arne Dietrich (2004) identifies 4 different types of creativity with corresponding different brain activities. Think of it like a matrix: 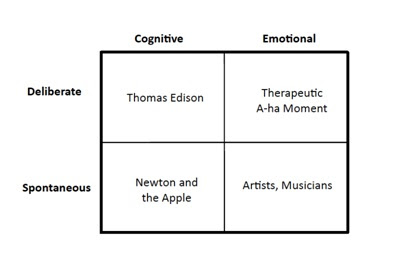 Creativity can be either emotionally or cognitively based, and it can also be spontaneous or deliberate. That gives you the four quadrants.

Deliberate and cognitive creativity is the kind of creativity that comes from sustained work in a discipline. For example, Thomas Edison, the inventor of the electric light bulb, was a deliberate and cognitive creator. He ran experiment after experiment before he would come up with an invention. In addition to the light bulb, Thomas Edison also invented the phonograph, and the motion picture camera. One of his famous quotes is:

Deliberate and cognitive creativity comes from the pre-frontal cortex (PFC) in your brain.  The PFC allows you to do 2 things: 1) pay focused attention and 2) make connections among information that you have stored in other parts of your brain. In order for deliberate, cognitive creativity to occur, you need to already have a body of knowledge about one or more particular topics. When you are being deliberatively and cognitively creative you are putting together existing information in new and novel ways.

– If you’ve ever had a personal crisis (relationship break-up, got fired, gone through a bankruptcy), and then had a flash of insight about yourself and what chain of bad decisions you might have made that contributed to the crisis, then you may have experienced deliberate, emotional creativity. This type of creativity also involves the PFC. That is the deliberate part. But instead of focusing attention on a particular area of knowledge or expertise, people who are engaging in deliberate, emotional creativity have a-ha moments having to do with feelings and emotions. The cingulate cortex is the part of the brain that processes complex feelings that are related to how you interact with others, and your place in the world. And the cingulated cortex is connected to the PFC. These two brain areas are active with this type of creativity.

– Have you ever been working on a problem or idea that you can’t seem to solve. Maybe you have been trying to figure out how to staff a project at work, and you just don’t see how you can free up the right people to do the project. Then you go to lunch, and on your way back you get a flash of insight about how to staff the project. This is an example of spontaneous and cognitive creativity.

Spontaneous and cognitive creativity involves the basal ganglia of the brain. This is where dopamine is stored, and it is a part of the brain that operates outside of your conscious awareness. During spontaneous, cognitive creativity, the conscious brain stops working on the problem, and this gives the unconscious part of the brain a chance to work on it instead. If a problem requires “out of the box” thinking then you need to remove it temporarily from conscious awareness. By doing a different, unrelated activity, the PFC is able to connect information in new ways via your unconscious mental processing. The story about Isaac Newton thinking of gravity while watching a falling apple is an example of spontaneous and cognitive creativity. Notice that this type of creativity does need an existing body of knowledge. That is the cognitive part.